There is always more than one way to skin a cat. You can either build crosstool-ng or you can have MacPorts or HomeBrew set up a compiler toolchain builder. If you chose to build crosstool-ng yourself a good outline is here. I used brew and still had to build some of external tools.

The first step in setting up crosstool-ng is to install it via MacPorts or HomeBrew. Since, I used brew, rather than macports. Step zero is to set up $PATH correctly so that they play well together if you prefer to use one over the other occasionally. In my case, I added the repository for brew to $PATH before anything else, so that when I use brew via terminal it does not conflict with the apple versions of tools.

Once brew is properly configured, you can then install crosstool-ng directly with a few tweaks to the repo file. This is mostly because the newer versions of xcode toolchain have started do not include the gnu versions of tools. You will be missing the gnu grep and gettext (which may be needed for Maverick or Yosemite, I just installed it and had no probs, with below).

Most dependency conflicts can be resolved by using homebrew/dupes. The exception being grep... there's the darwin version and the gnu version... for that you should edit the crosstool-ng.rb file as follows rather than install a parallel version as some have suggested. Note that when you do brew update your changes will be lost to the crosstool-ng.rb file.

Add to bottom of the depends_on section of the file:
depends_on 'grep' => '--default-names'

This should download, build and install crosstool and it's dependencies without any hiccups.
Note: you should get a caveat at the end about 'installing a modern gcc compiler' to use crosstool-ng.

Next you need to create a 'spare image' that is 'case-sensitive' to build the toolchain for BBB's ARM processor. I used disk utility and there were a few gotchas I ran into while attempting to do this. The first is that you cannot create a sparse image on the 'top-level' of your Mac... it must be created in your user space. So, I just created it on ~/Desktop initially. But keep in mind that where ever you create the spare image, your Mac will mount a path to it in /Volumes/$Name. 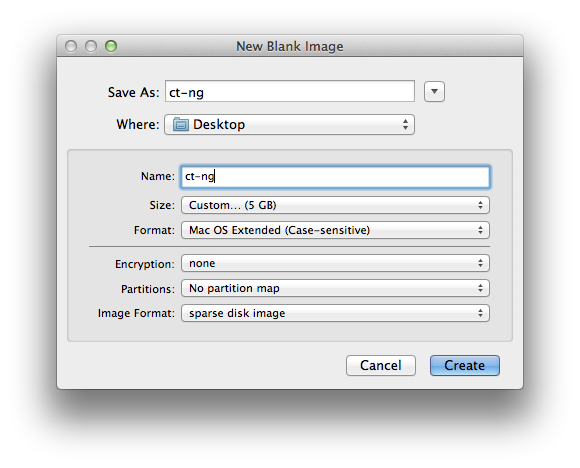 Now you have somewhere to compile the toolchain. Keep going, you're nearly started...

After creating the spare image disk, navigate to it and continue.

Even if you configure ct-ng properly, you will likely get some warnings after the tarballs are downloaded because there are references to autoconf that are not resolved. These will be warning aclocal and automake not installed, and it will say the version that crosstool-ng was built against.

Note: If you're not sure about the autoconf or you don't trust me... just run ct-ng menuconfig and press <esc><esc> and <enter> to save a default .config file on the sparse image disk location. Then you can run ct-ng build to build the toolchain and you will see the warnings in the terminal just after all the tarballs are downloaded, extracted, patched and the first pass over the C Library starts (about 8-15min into the process) - you will see the warnings. It will continue, and probably build, but my feel was "it ain't right".

Here's what I did to resolve the autoconf warnings. These are the numbers for crosstool-ng v1.20, below (the warning I got had v2.65):

Now you should have autoconf installed and added to your $PATH for ct-ng to use.

Next, you have to configure crosstool-ng with the menuconfig to target the architecture that you are trying to compile against to build the toolchain. In my case, I had to dig around on the BBB to find the version of gcc and the kernel numbers to make sure they were all correct.

At this point you should be able to ssh into the BBB and get this info:

I had to modify the menu configuration a lot before I actually got something working. My first few attempts were quite futile for various configuration settings that I had missed. It takes about 30-1hr to compile and install everything so a little upfront research is a good time saver. My suggestions are are to first briefly review the Cortex-A8 documentation, the gcc compiler options for ARM, and the gcc installation options at the links below before you get started building.

Understanding the above options are the key to navigating some of the info in the menu configuration setup in crosstool-ng. You can enter the tool by using:
$: cd /Volumes/ct-ng
$: ct-ng menuconfig

The specific options I would recommend tweaking are the following:

That's it. The only other gotcha is... The terminal process will need you to set the ulimit to higher value so you don't randomly get some unknown errors because the process has exited from the memory growing too large. At this point you should be able to build the toolchain:
$: cd /Volumes/ct-ng
$: ulimit -n 4096
$: ct-ng build

The clean command will also remove the tarballs, so... you can always copy the tarball directory before you clean from .build/tarballs to save you the trouble of downloading everything over and over. If you change something in the .config though, you may want to disregard this statement? It depends on if you know what you're doing...

Great now you've got a toolchain, but how do you use it? In the end you will have a folder called $your_choice above.  In my case, I called it 'hh' for me. All of the following documentation that follows is for /Volumes/ct-ng/hh/.
If all goes well you can just get started with eclipse directly - meaning you've updated debian on the BBB side to include all your shared libraries already...

Next, create a new C++ project in eclipse: 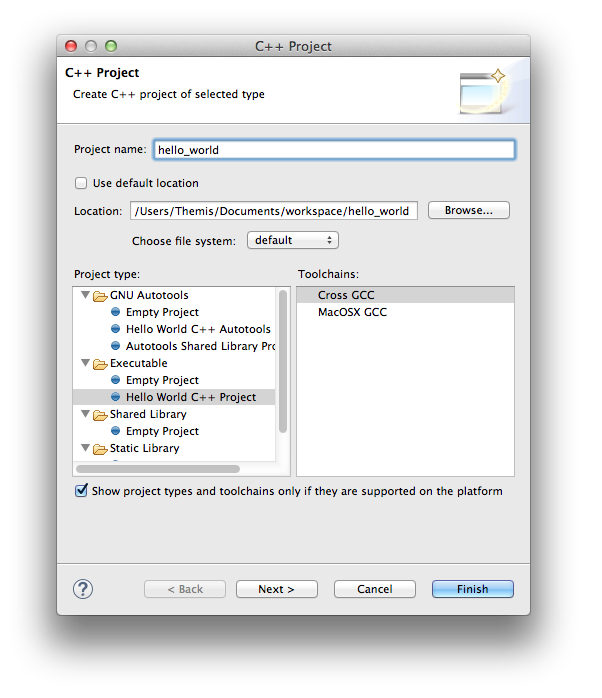 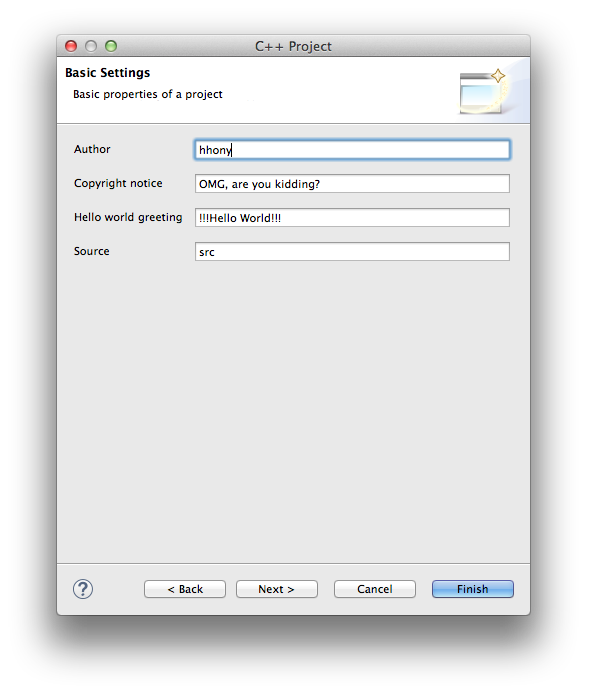 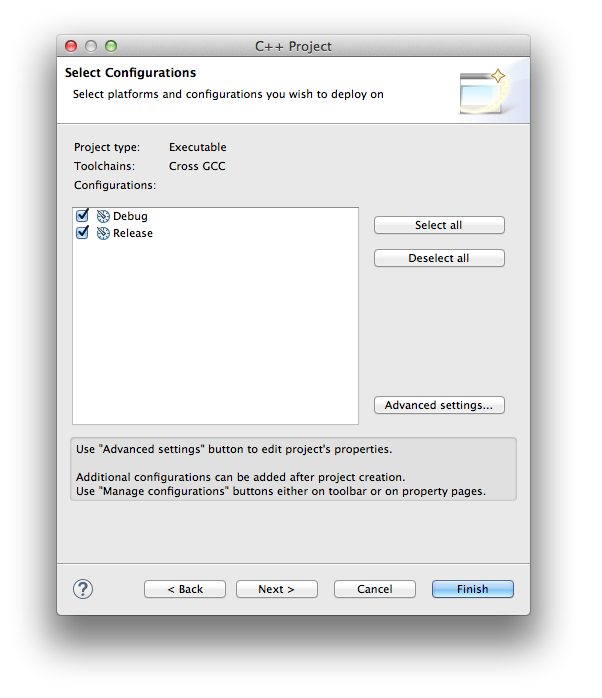 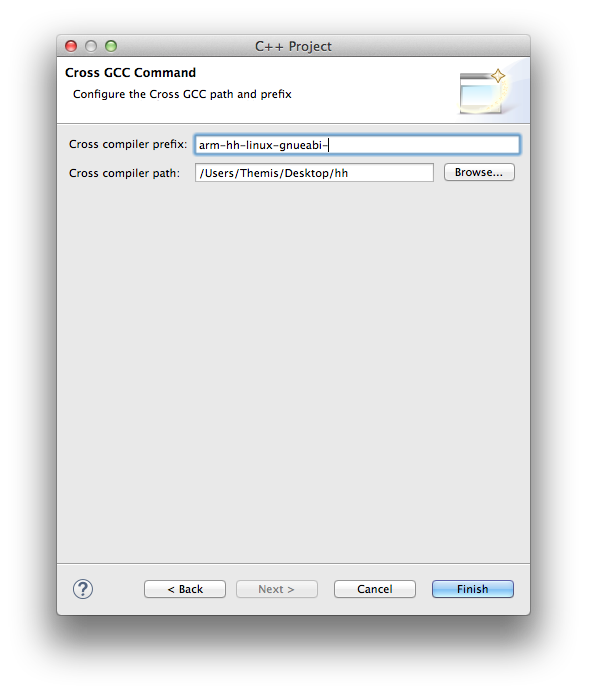 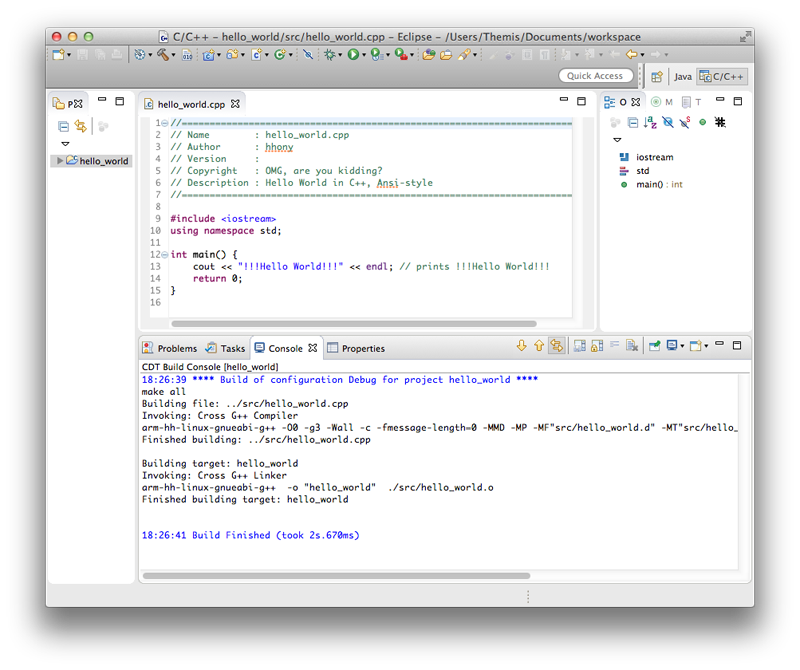 Now that you've built the project, it's time to deploy it.